The Pakistani Army puts up a white flag and accepts the slain bodies of its officers in this damning video. Pakistan lost more than 4000-6000 soldiers in the Kargil war, while India lost 500 soldiers. Pakistan generally disowned the bodies of most of its soldiers but accepted a few senior officers.

According to the information fed to every Pakistani, the Kargil war was fought by mujahideen and not by Pakistani Army regulars. This video shows the Pakistan Army very clearly involved at Kargil. They did'nt count on ace videojourno Kunal Verma, filming the whole event. Nor did they count on being outclassed in combat, yet again, by an Indian.

Posted by santoshpandeyca at 3:49 PM 14 comments: 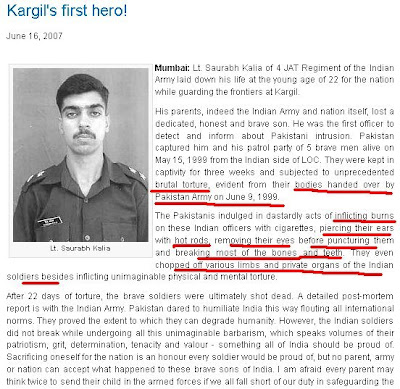 Posted by santoshpandeyca at 3:14 PM 4 comments:

Nearly 6.5 million BPL families who depend on kerosene for their cooking and lighting needs as well as farmers who use it for pumpsets and spray pesticides could soon be exposed to cancer-causing fumes from markers that will be laced with the poor man's fuel to check diversion.

Markers are chemicals that cannot be distinguished once they are mixed with kerosene. But if such doped kerosene is used to adulterate motor fuels, the marker will show up when petrol or diesel samples are tested using special equipment. Since kerosene costs nearly half of petrol or diesel due to subsidy, nearly 38% of supplies for the poor are siphoned off for adulterating motor fuels.

To check such diversion, state-run oil marketing companies are about to roll out the marker throughout the country. But test criteria specified in the procurement norms means only markers with `halogenated hydrocarbons' -- which can be detected using X-Ray (XRS) or gas chromatograph technology -- will qualify, sources said.

Halogenated hydrocarbons are among 189 `hazardous air pollutants' listed in the US Clean Air Act of 1990. The Act bans their use in fuels as after combustion they produce `toxic dioxins', described by US Environmental Protection Agency as extremely harmful to humans and environment. Generally, these chemicals are used to conduct lab tests to detect toxicity in foods and not used in fuels anywhere in the world.

It transpires that no environmental or health impact study was done before setting the procurement criteria, which appears to purely focus on a marker's ability to detect adulteration. Neither is there any hint that a marker will have to undergo a green or health test. This is surprising since as early as 2005, Hindustan Petroleum's then R&D advisor, A K Bhatnagar, had described the problems associated with halogenated hydrocarbons in his presentation on fuel quality made at a Ficci-Petrotech seminar in Delhi.

Company executives, however, said "pollution aspects have been taken care of" in the procurement norms. "The technical committee has laid down elaborate parameters. They will test each marker against those parameters and safety will be assured," a top executive of an oil company who is involved with the procurement process said, requesting that neither he nor his company be identified.

The crux lies in one of the criteria in the norms, called the `charcoal test'. In this test, charcoal should not be able to filter or remove the marker from kerosene. According to sources, only markers with halogenated hydrocarbons can pass this test.